Cardiff’s Crafty Devil Brewing is what we want every craft ale start-up to be – a brew house founded by two guys who loved beer and made a decision over a pint. Or eight. And with no idea about how to make this thing they love called ‘beer’, but armed with an eight-pint determination anything is possible.

I’ve been to Crafty Devil’s Cellar Bar on Llandaff Road a few times to get suitably squiffy, so I was chuffed when I was invited to see the method behind the madness and to help brew their ‘coming soon’ bloggers beer – Paperback Writer. *Will update more on this once it’s finished brewing* 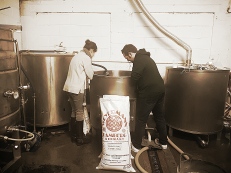 On any other occasion, an 8am start in a cold warehouse would have not been enough to get me out of bed on a Saturday morning. But for Crafty Devil co-founder Adam, this is an everyday part of working life. In the past week he said it had been ‘raining indoors’ as the frost melted from the underside of the corrugated iron roof. They won’t have to put up with it for long though, with plans to move in February to a site on Ninian Park Road – twice the size and much better suited to an operational brewery. Currently, the brewery has between 5-6 small (ish) fermenting tanks (?), so they’re only able to focus on brewing a few beers at a time, but it all adds to the appeal of craft brewing. There’s something a bit special and personal knowing that your pint was one of only a few to pour out of that barrel!

Adam talked us through the ingredients for our American pale ale – Vienna Malt and naked oats, water Elderado Hops, and yeast. The process of mashing the malt with water, which activates the malt enzymes, and converts the grain starches into fermentable sugars (appaz), is all done by hand. Or, rather, by the end of a pole which has lovingly become known as the Crafty Devil masher. 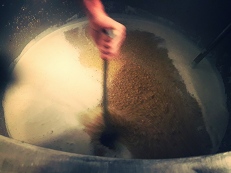 One thing I never knew (among the many hundreds of things I don’t know about brewing beer) is that the flavour can be influenced by the profile of the water within the region. A bit like the way the flavour of wine is dependent on the conditions that the grapes are grown in. Of course, this isn’t the only defining factor. But hardened water, for example, works particularly well with hops and darker beers. Whereas Cardiff has a relatively soft water profile, compared to other cities, so pale ales are at their best in these types of conditions. And the water profile can change, so it’s important to check-in with the annual water report for the local area.

Next for the hops. On rubbing it into my hands it had a lovely lemony heather fragrance. Given the hops shortage vs a growing craft ale industry, getting your hands on hops can be extremely competitive – and especially tricky for smaller brewers. Just to put it into context, Crafty Devil have to place their hops orders over a year in advance. And it’s not always possible to have the pick of what you’d like to try, but it does mean getting creative and experimenting – plus every so often something a bit more unusual becomes available.

There is a growing economical concern for UK brewers, too. According to Adam, the price of hops have gone up around 20% since the announcement of Brexit, so we all know who to blame when the price of our average pint goes up. It also waves a worrying question mark over how some food and drink companies, which rely upon European imports, will fair once Article 50 is signed.

So with unpredictable times ahead for the UK economy, and in the interest of expansion, the Crafty Devil team – quite sensibly – wants to take even more control over their costs. Plus better safeguard the quality of their hops and give a nod to sustainability, so the team is crowd funding its very own cannery. Cans are better for hoppy beers as there is very little aging and oxidisation – which is difficult to control if the beer is taken to be canned off site. And for those who choose to put their money where their pint is, there’s a range of Crafty Devil perks to be had #cannedincardiff

Thanks CD for an insightful peak behind your barrels and helping me understand a bit of what brewing is all about!