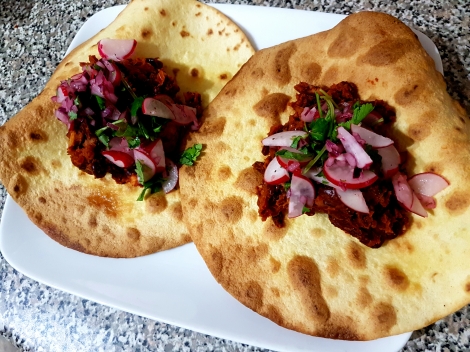 Saving for a house means trying to eat within your means… and healthily. Which is harder than it sounds. But lately I’m in awe of how many bean-based recipes tick both of those boxes. Whenever I go to the supermarket, I feel like half of my trolley is filled with tins of butter beans, cannellini beans, lentils and chick peas – yet they still only cost a fraction of my total food shop.

This kidney bean tostada recipe I found on the BBC Good Food website turned out to be an absolute stonker. Crispy corn tortillas topped with tomatoey, garlicky kidney bean mash and zingy red onions, softened by lime. Some sliced radish and a sprinkle of coriander to top it off. Just 15 minutes to make, 244 cals per tostada – and vegan, which is basically unheard of for me.

Highly recommended for a weeknight meal.

Heat the oven to 220C. While you’re waiting for it to heat up, chop up the onions, garlic, radishes and coriander. Keep each sliced onion separate as you’ll be using them for different parts of the recipe.

Tip the kidney beans into a colander and let them drain, run some water over them to speed up the process.

Heat 1 tbsp oil in a frying pan and cook one of the diced red onions on a medium heat until soft.

While you’re waiting for them to cook down, pop the other diced onion in a bowl and squeeze the lime juice over it. Add the sliced radish and chopped coriander to the bowl.

At this point, if the oven has heated up, brush the tortillas with the remaining oil on both sides and pop them into the oven to crisp up – they should only take about 5-8 minutes, so keep an eye on them to make sure they don’t burn.

Next, add the garlic to the frying pan along with the kidney beans and tomato puree and mash them using a spatula or the back of a fork. Season well at this point. If it becomes dry and starts to stick, just add some water. Cook for a further five minutes or so, until heated through.

Take the tortillas out of the oven, top each one with the bean mixture and serve up with the pickled red onion, radish and coriander salad.