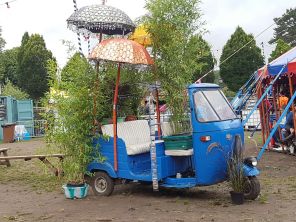 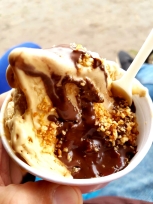 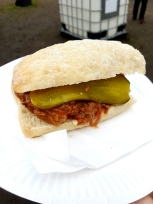 Got Beef – The Soprano 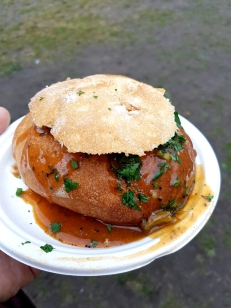 Cardiff’s best street food event is back – this time popping up in a corner of Sophia Gardens (not far from the Mochyn Du) Thursday to Sunday throughout August and September. As before, the vendors rotate at each event, but this time there are three themed food zones – ‘The Farm Yard’ (award-winning ethical traders), ‘Singha Street’ (eastern inspired cuisine), and ‘The Block’ (street food kitchens with a whiff of downtown).

We embraced the flood warnings and unpredictable downpours and popped along on the opening weekend for a late lunch/early dinner. There were lots of people huddled under the circus canopy, but we were lucky enough to nab a cosy seat in a tuk tuk. I’d challenge anyone to just pick one dish, so we chose two savouries and two sweets each and I have to say that none of them were disappointing.

Out of the savouries, Got Beef’s spicy ‘Soprano’ slider came out on top with bonus points for taste, and the peanut and oreo powder on Little Bao Peep’s pulled pork bao was something which shouldn’t have worked, but definitely did! Patagonia’s rich tomatoey 48 hour brisket roll with the saltiness of the Stilton just danced on my tongue – but I did feel at £8 it was a little pricey.

Early Bird’s malt-chocolate sauce somehow made their doughnut dessert taste sophisticated. Science Cream’s hazelnut ice cream was the real surprise as, personally, I’d never order ‘just ice cream’ for dessert (particularly on a rainy day). I got to try a bit of James’ and the smoothness of the texture and the strength of flavour was simply outstanding – definitely a ‘just ice cream’ convert!

All sounds lush right? You’ve got a whole month to get down there, so make sure you do.

My eat of the week

2 responses to “The return of Street Food Circus, Cardiff – review”