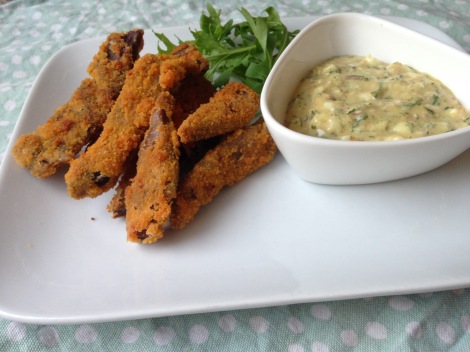 This Matt Tebbutt recipe for lamb breast has been a favourite of mine for some years now. I was lucky enough to try it made by the chef himself when I went to oversee a Welsh Lamb recipe editor’s day at The Foxhunter a few years ago, which I had helped  to organise – PR is a tough gig at times! Sadly for us Matt closed The Foxhunter to focus on his TV career, but we could start to see him and more of his recipes if he becomes the official Saturday Kitchen presenter – fingers crossed. 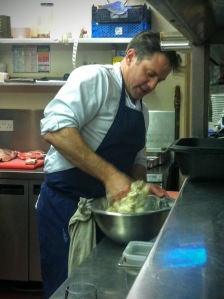 Lamb breast is a super cheap cut, but unless you’re a big fan of fat it can be difficult to do much with it. This recipe not only makes lamb breast edible to those who would usually gag at the squidgy texture of fat, it becomes a cut you just want to keep on eating!

With some recipes I skip making the sauce or vinagarette to keep things simple (I bet most kitchen cooks are the same), but in this case I would definitely recommend spending the few extra minutes it takes to make. Breast is a particularly rich part of the lamb so this tangy fennel dip cuts through the richness of the meat and complements it perfectly.

Overall this is a really easy recipe, just a little bit faffy (breadcrumbing), and makes a great starter among 4-6 people, or even a main among 2-3. Plus, after you have boiled the lamb with a load of veg you can zuzz it up to create a really scrummy broth or soup for another day.

Bung the lamb breast along with all of the veg and herbs into a big pot, cover with around 250ml of lamb stock (add more if it doesn’t cover the lamb completely), pop a lid on it and leave it to simmer on a lowish heat for 1 1/2 – 2 1/2 hours.

Take the pan off the heat and remove the lamb from the pot. Keep the remaining liquid and veg for a broth or mix in a food processor to make a soup and freeze for another day.

Sandwich the lamb breast between two trays and squish together so the the meat flattens. Ideally you can put it in the fridge over night to set, but if you don’t have time just leave it for about half an hour.

Next, cut any excess fat from the lamb – you’ll find thin layers of fatty membrane which you should be able to slice away easily with a sharp knife. It doesn’t matter if you don’t remove all of it. Then cut the flattened piece of lamb into fingers.

Dip each finger first in flour, then in the egg and then in breadcrumbs until each has a crumbed coating. Then fry them a few at a time in olive oil on a medium to high heat in a wok or deep frying pan. You can bake them in the oven at 180C but, as with everything, it tastes better fried. Fry them until golden (be careful not to burn) and then when each one is ready place them onto some kitchen roll laid out across a plate or tray.

Once they are all fried, make a start on the vinaigrette. Mix the Dijon mustard, garlic, shallots and red wine vinegar in a bowl and add the olive oil one tablespoon at a time, mixing in with a spoon as you go to make sure it doesn’t separate. Then, boil the eggs for about 4-5 minutes and when done carefully peel off the shells. Carefully tip the soft egg yolk into the vinaigrette and then finely chop the whites before adding to the dressing.

Then dip, dip, dip away!